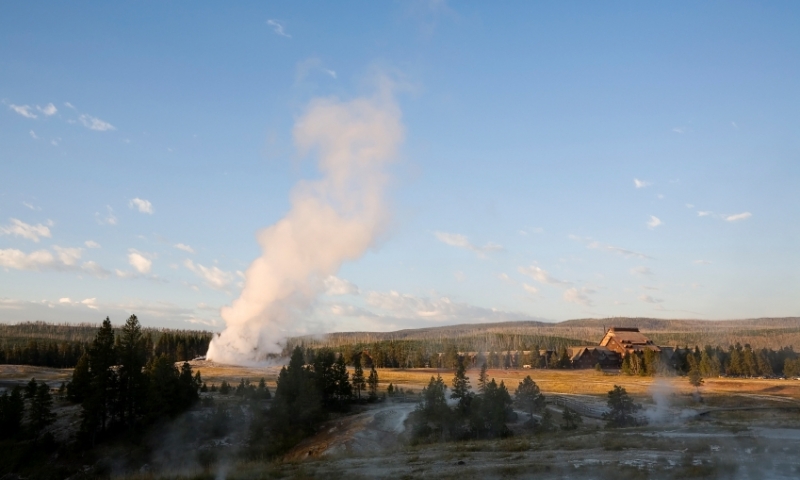 Old Faithful is the most popular attraction in Yellowstone National Park. It erupts on a predictable schedule, making it easy to enjoy.

One of the most famous vistas in Yellowstone, the Lower Falls plummet 308 feet, almost twice as high as Niagara Falls! Upper Falls are cool, too. 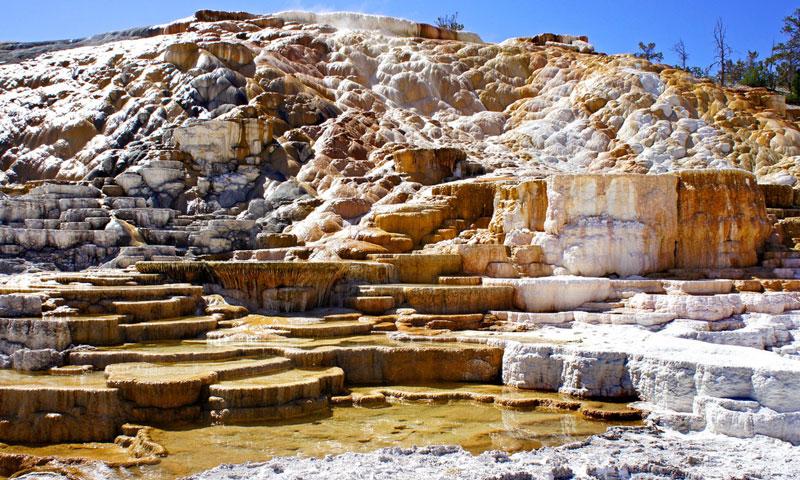 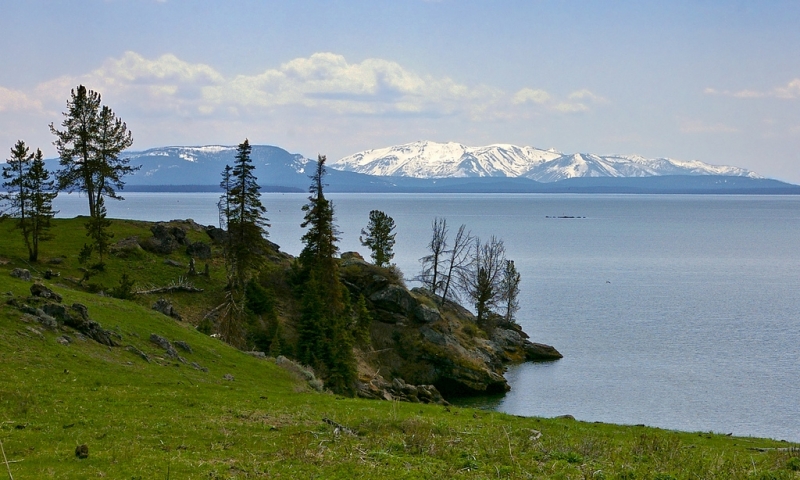 Yellowstone Lake is the largest lake in the park. Its is easily accessible and activities include boating, hiking, fishing, camping, and lodging. 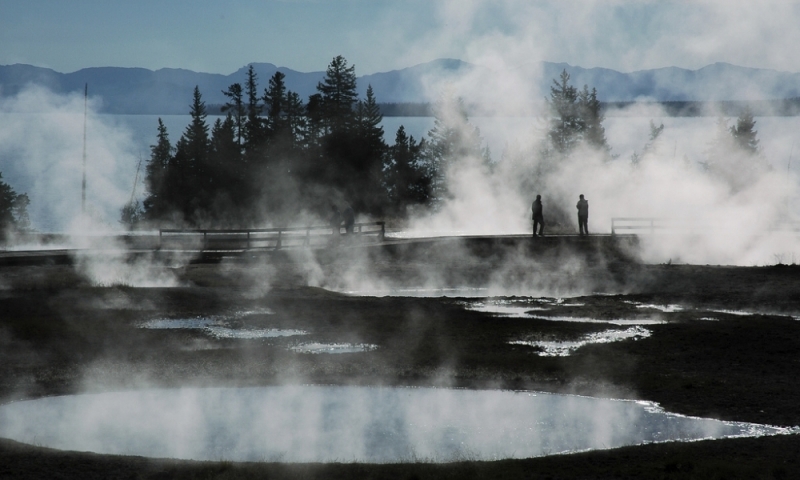 Yellowstone National Park contains more than 75% of the world’s geysers, along with fascinating and colorful mud pots, hot springs and fumeroles. 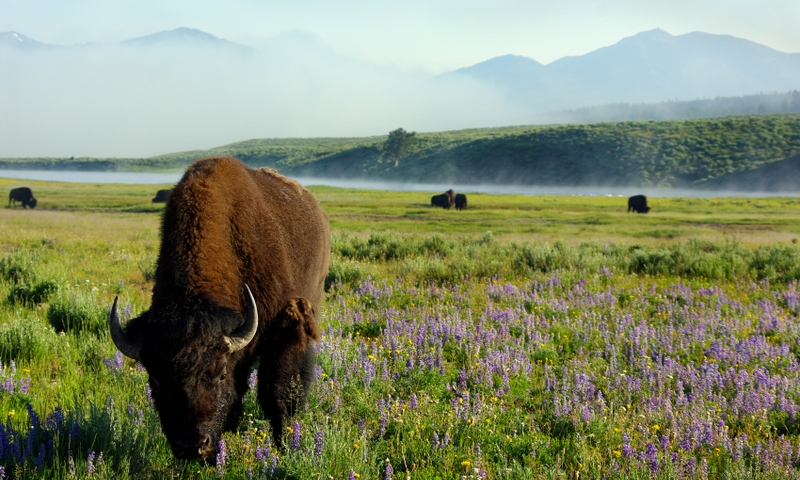 The Lamar Valley marks a wildlife hot spot and scenic area in Northeast Yellowstone, between the Tower Roosevelt Junction and Cooke City.

Attractions are endless in Yellowstone. Explore each region within the park for a unique experience and visit sites like Old Faithful, Mammoth Hot Springs and Grand Canyon of Yellowstone.

Some 350 miles of paved road wind through the park, crossing the Continental Divide three times and looks much like a figure 8; the upper and the lower grand loops. There are 7 major areas or districts, within Yellowstone National Park where the majority of the major attractions are found. Most will be located on the lower loop.

Below is the listing of the 7 districts, an overview of what you will find in each and a more specific sampling of the attractions in each district.

The Madison district is best known for its fly-fishing, and wildlife.

Old Faithful district is where you will spend most of your time viewing geysers, hot springs, steam vents "fumaroles", and paint pots, views along the Firehole River as well as wildlife.

The Lake District would include Yellowstone Lake as well as hot springs, fumaroles, and possibly bears.

The Norris district will include Norris Geyser basin, one of the more dynamic geothermal basins within Yellowstone as well as open meadow scenes with wildlife and views along the Gibbon River.

Mammoth district is home to Yellowstone Park headquarters and historical buildings as well as wildlife, and the famous travertine terraces.

The Tower / Roosevelt district is best known for its wildlife, waterfall and river scene as well as geologic evidence left behind by past volcanic eruptions. This district is considered to be the lower elevation for Yellowstone, and is spring/winter range for numerous species of wildlife.

Yellowstone Park is also home to abundant and varied wildlife, unlike anywhere else in America. Nearly all wildlife species that inhabited the park when it was first explored over 100 years ago survive today.

Is Yellowstone or Glacier better?

Each park is unique in its own right. Yellowstone has world-famous geysers and hotsprings that can’t be found anywhere else. However, the popular visitor areas are often fairly easy walks. Glacier offers a more rugged experience with more rigorous hiking, greater sense of adventure, and an enriching taste of mountain culture.

Is it worth going to Yellowstone?

What are the must sees in Yellowstone?

Dozens of features and locations in Yellowstone should stop you in your tracks. You could easily spend a week in Yellowstone and still only scratch the surface, which is why visitors keep coming back for more. Common items on people’s must-see list of Yellowstone include the following:

What else is near Yellowstone?

The jagged spires of Grand Teton National Park are a stone’s throw outside Yellowstone. Exciting in their own way, each gateway town outside of Yellowstone’s entrance gates offer their own exciting attractions and outdoor recreation opportunities. Gardiner, Montana is famed for its river rafting experiences. If you missed seeing live wolves and bears within the park, check out the creatures at the Grizzly Discovery Center in West Yellowstone, Montana. Cody, Wyoming is home to the Buffalo Bill Museum and the largest zipline in the state. Silver City/Cooke City, Montana is home to an old-time outpost that’s been operating since the late 1800s and still has the feel of an old mining outpost. And Jackson, Wyoming is a major outdoor capital.

What is Yellowstone National Park famous for?

Yellowstone National Park is famous for its surreal geysers, boiling mud pits, hot springs, and waterfalls. From its peculiar geologic features to its untamed wilderness and wildlife, Yellowstone is unlike anywhere else on the planet.

Which is better Yellowstone or Grand Teton?

If you want breath-taking picturesque mountain landscapes, 200 hundred miles of backcountry trails and heaps of recreational opportunities, head to Grand Teton. For those who want an otherworldly experience, the thermal features in Yellowstone are unlike anywhere else on the planet. Both offer a rich history steeped in mountain culture and surreal wildlife viewing opportunities. But why choose between the two, when you can easily experience both in one trip? Grand Teton National Park is less than 7 miles away from Yellowstone’s South Entrance via the John D. Rockefeller Memorial Parkway.

Which part of Yellowstone is the best?

By using the West Entrance you''ll be able to most easily visit the majority of its thermal features. To the north of Madison Junction is the Norris Geyser Basin. Farther north is Mammoth Hot Springs, a giant hot spring and natural water fountain that built up over millennia. Head south from Madison and you’ll be able to visit Grand Prismatic Spring, Lower Geyser Basin, the Midway Geyser Basin, and the Upper Geyser Basin where you’ll find the world-famous Old Faithful Geyser. 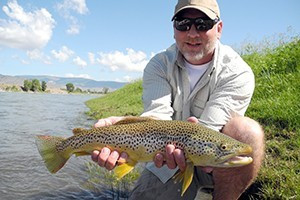