Native Americans called Yellowstone home from 11,000 years ago until the recent past. After the Lewis and Clark Expedition traveled through the area, many mountain men and trappers set up camps, followed by the area's first tourists, and finally the establishment of the National Park. Read More 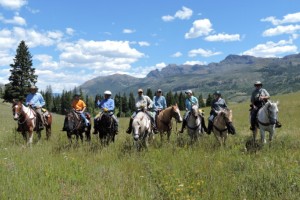 Our pack trips re-trace the steps of some of Yellowstone's early pioneers, discovering geysers, waterfalls and rivers along the way. Bring appetites, curiosity & cameras.

Mountain Men and Trappers
Other mountain men, who were searching Yellowstone for beaver and other pelts for trading, followed Colter. Few believed the stories of beauty and wildlife that were told by these men.

Tourism
Yellowstone's first tourist, coming here not for business but just for pleasure, was Warren Angus Ferris. Intriguing tales of Yellowstone drew more people to the untouched land. Travel was by horse or mule through forests that were often so littered with dead trees that one could only cover two to three miles in a whole day!

A National Park is Established
After the area was set aside in 1872 as the nation's first national park, visitation "skyrocketed" to around 1,000 people each year. These visitors had to travel through the park on bridal paths and game trails and sleep on the ground or in tents. In 1883, the U.S. Army Corps of Engineers arrived to begin proper road building, after which overnight accommodations sprang up throughout the park. While most folks rode the stagecoaches, there were still some intrepid souls who chose other means of touring the park. The first bicycle tour of the park took place in 1883, when three members of the Laramie, Wyoming, Bicycle Club came to visit, and in 1898 an Englishman, C. Hanford Henderson, toured the entire 140 miles of the Grand Loop on foot in 4 1/2 days! The grand era of stagecoach travel ended in 1917 when touring cars replaced the stages. The Northern Pacific Railroad and the Union Pacific Railroad, which had reached West Yellowstone in 1907, both started passenger service in the 1950s when travel to Yellowstone became essentially what we know today.